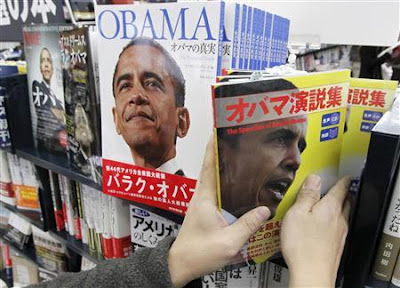 I read this interesting bit of news today from the newsfeed I get in my Gmail mailbox. I never thought I would include a blog post about Obama, what with everyone else doing it :-). Truly amazing. Here’s the news item:

TOKYO (Reuters) – President-elect Barack Obama’s speeches are proving a best-seller in Japan — as an aid to learning English.

An English-language textbook, “The Speeches of Barack Obama,” has sold more than 400,000 copies in two months, a big hit in a country where few hit novels sell more than a million copies a year.

Japanese have a fervor for learning English and many bookstores have a corner dedicated to dozens of journals in the language, many of them now featuring the new U.S. leader’s face.

“Speeches by presidents and presidential candidates are excellent as listening tools to learn English, because their contents are good and their words are easy to catch,” said Yuzo Yamamoto of Asahi Press, which produced the best-selling text book.

“Obama’s is especially so. His speeches are so moving, and he also uses words such as ‘yes, we can,’ ‘change’ and ‘hope’ that even Japanese people can memorize,” he said.

Speeches by President George W. Bush and former nominee John Kerry’s four years ago did not have the same appeal, however, and nor do those made by Japanese politicians, Yamamoto said.

“In Japan, we don’t have politicians who have such a positive influence. That’s why we have to turn to a foreign president for someone in whom to place our hopes.”

The 95-page paperback features Obama’s speeches in English from the 2004 Democratic National Convention and during the Democratic Party primaries, in which he defeated Hillary Clinton. They are accompanied by Japanese translations.

The 1,050 yen ($12) book, which includes a CD of the speeches, tops the bestseller list on bookseller Amazon’s Japanese Website, www.amazon.co.jp/

“Readers have sent in postcards saying that when they heard the speeches, they were so moved and cried even though they don’t understand English very well,” Yamamoto said.

Following Obama’s inauguration on Tuesday, Asahi Press plans to issue a sequel that includes his inaugural address, as well as President John F. Kennedy’s 1961 inaugural speech. It will also feature a reading of President Abraham Lincoln’s Gettysburg address of 1863.