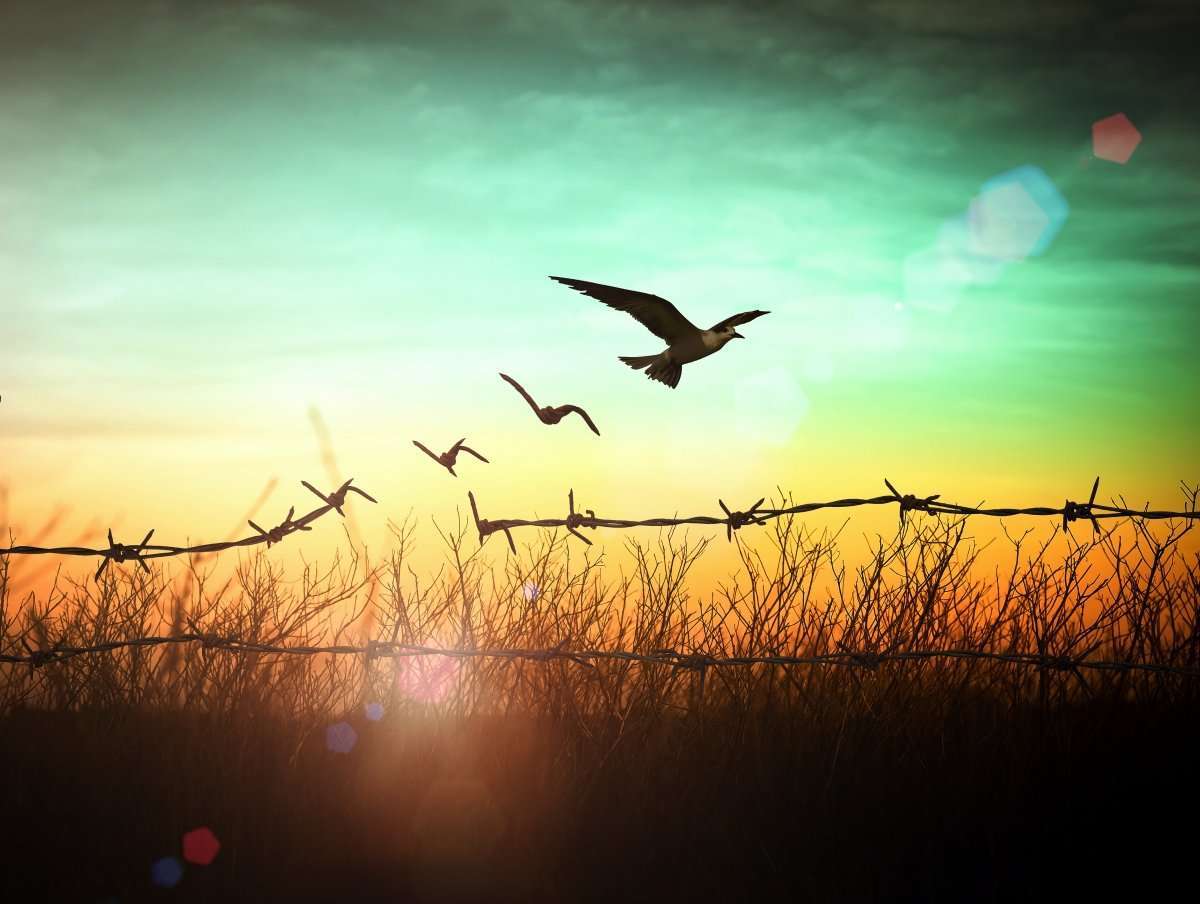 To err is human. In the process, people get hurt. If only one could turn the clock back and undo what happened.

But there is a way.

Everyone makes mistakes. We hurt others. Others hurt us.  Luckily, we have the choice to come to terms with the situation and let go of the painful memories so we can move on with our lives.

“Forgiveness is not something we do for other people; we do it for ourselves – to get well and move on.”

If you’re thinking forgiving someone lets the one that hurt you off the hook,  that’s not it. Forgiveness is all about feeling happier and releasing the suffering to make us feel better. Thing is, suffering does not help anyone.

Here are some wonderful quotes on forgiveness:

“Anger makes you smaller; while forgiveness forces you to grow beyond what you were” 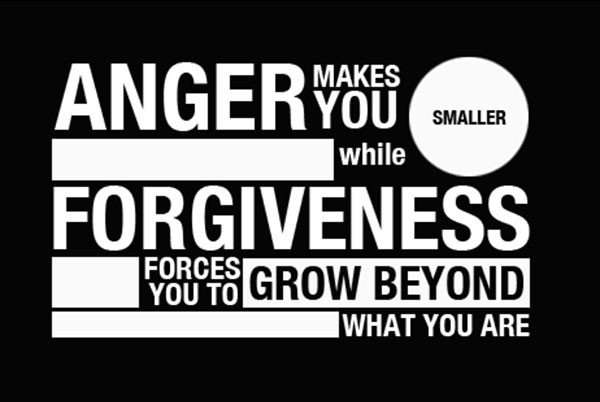 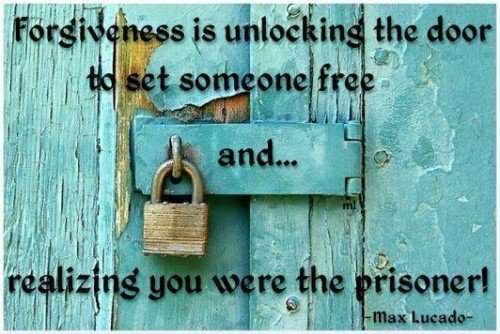 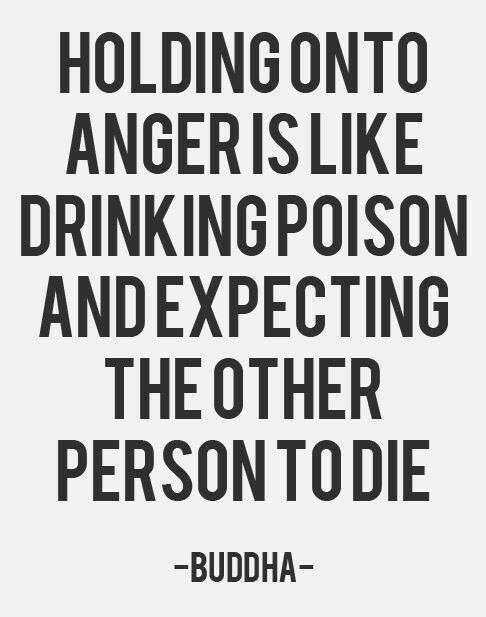 “Forgiveness is a process. Forgiveness is not about giving your approval of an offender’s wrong-doing. Its not about viewing what they did as less harmful than it truly was. And it’s not about giving the offender a “free pass” to keep on doing wrong actions against you. Forgiveness is about recognizing that staying resentful creates an “Active Echo” of the pain the offender caused. By saying that the awful offense the offender did is “beyond forgiving” you give them the power to keep their offense alive in your heart. Forgiveness begins with the mind recognizing that there’s a truthful logic in how the past cannot be changed, but happily the present and future can be. Eventually forgiveness progresses to the heart – with the heart deciding it will no longer allow the offender’s pain to take permanent residence. Yes it is a process, but eventually the mind and heart together recognize that the choice to forgive is both logical and spiritually liberating.” 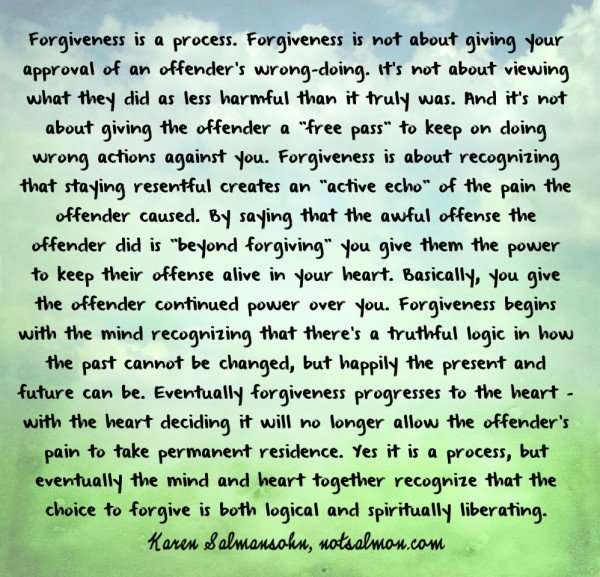 Anyone can hold a grudge, but it takes a person with character to forgive. When you forgive, you release yourself from a painful burden. Forgiveness doesn’t mean what happened was OK, and it doesn’t mean that person should still be welcome in your life. It just means you have made peace with the pain, and are ready to let it go. – Unknown 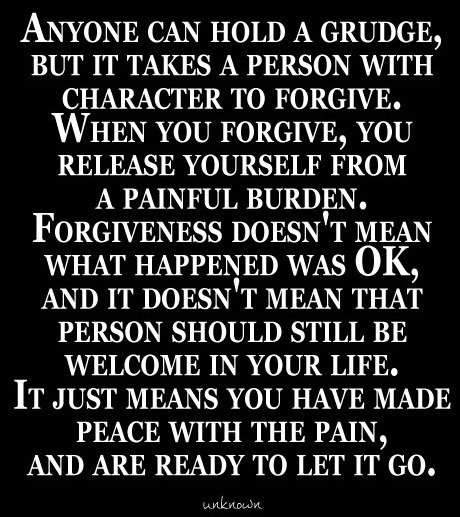 Forgiveness brings freedom
freedom from being controlled by the past, from the emotional ties to the offender
freedom from the continual inner conflicts of bitterness and hate
freedom to become whole and enjoy the fullness of life
– Jeanette Vought

I would love to know your views on forgiveness. Do you think it is easy? tough? worth it? 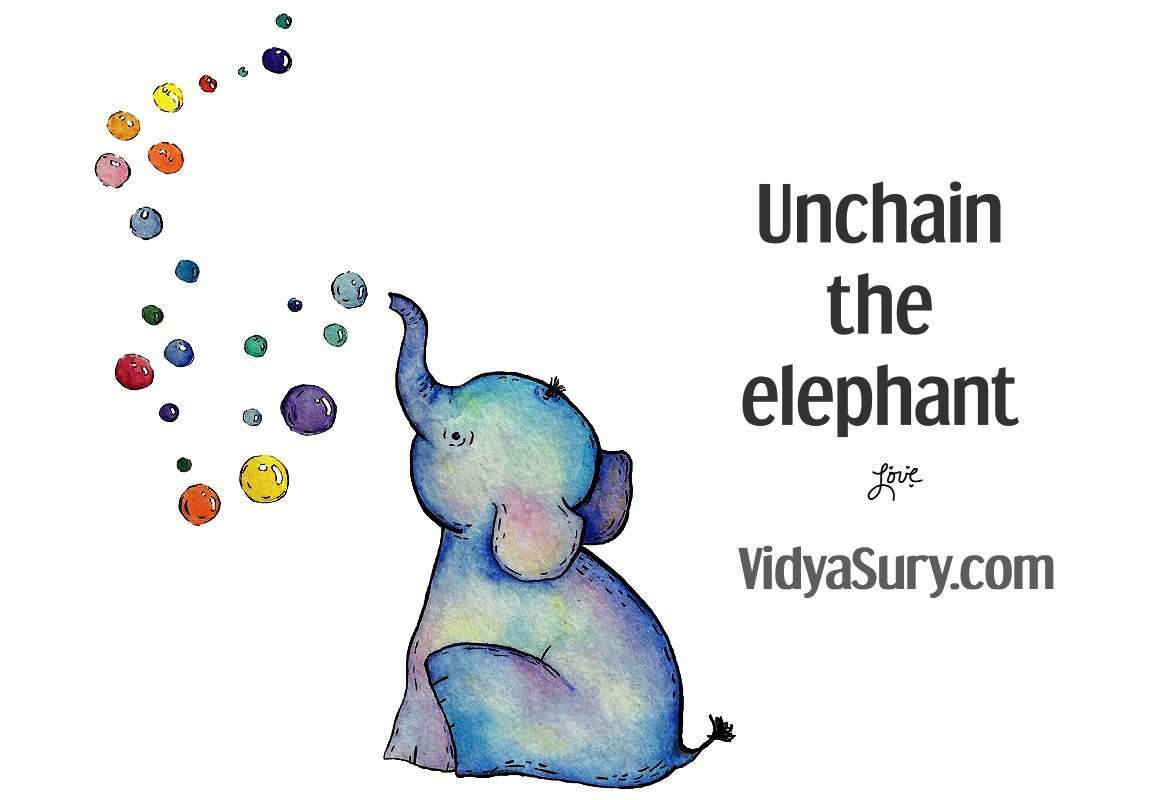 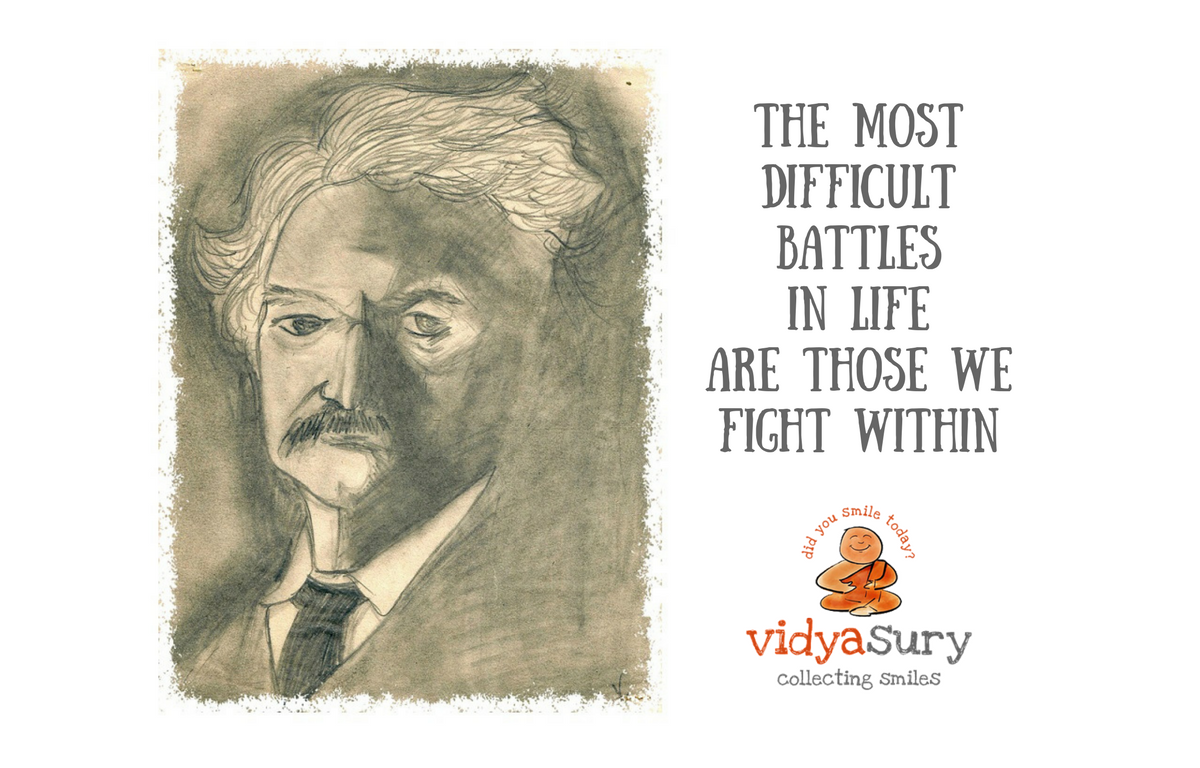 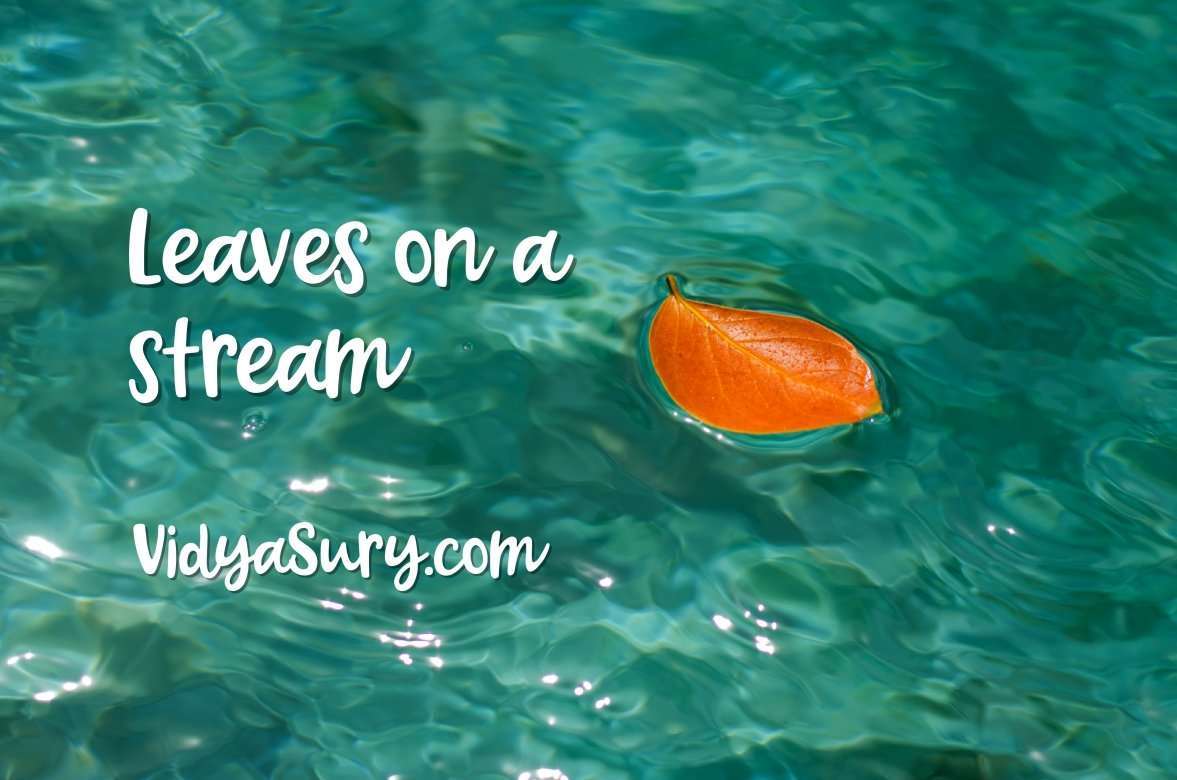 Leaves on a Stream Exercise

Worried About Not Being Good Enough? 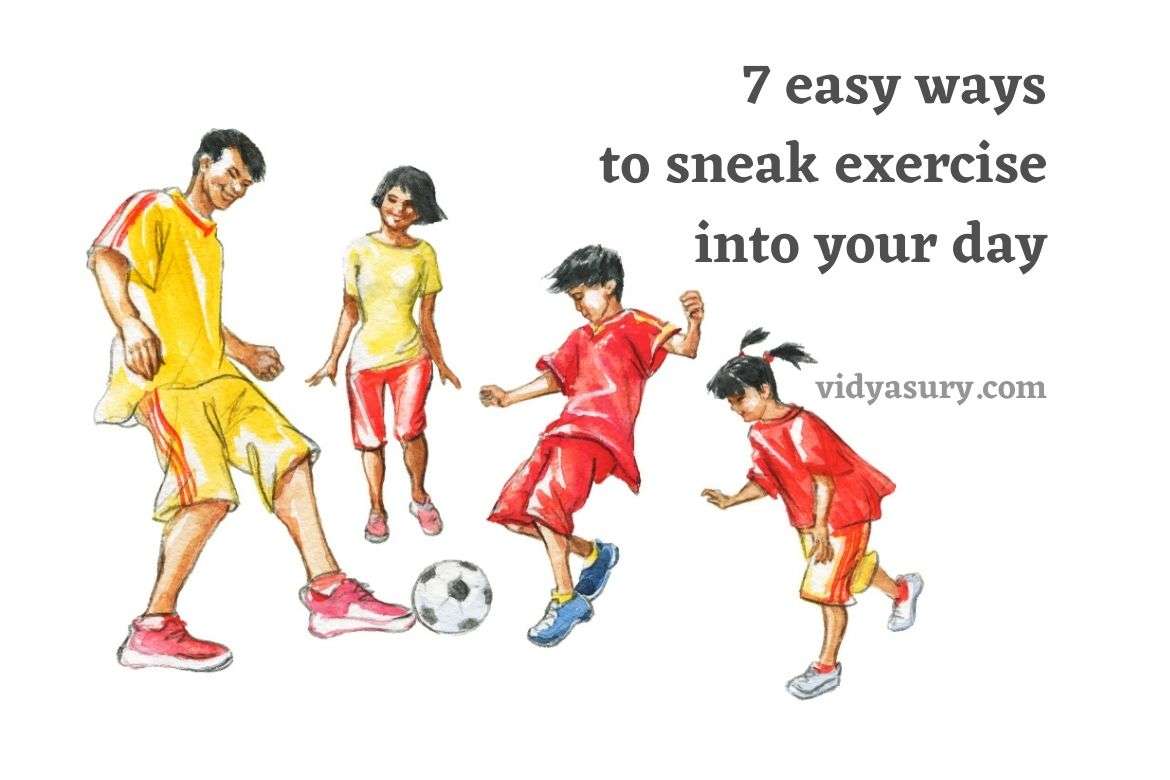 How to Sneak Exercise into Your Day (7 Easy Ways) 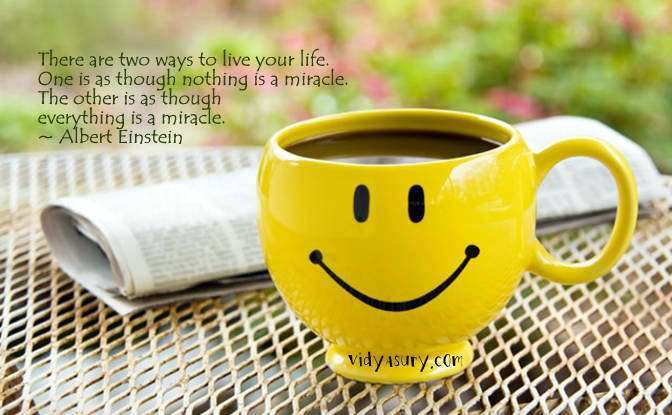 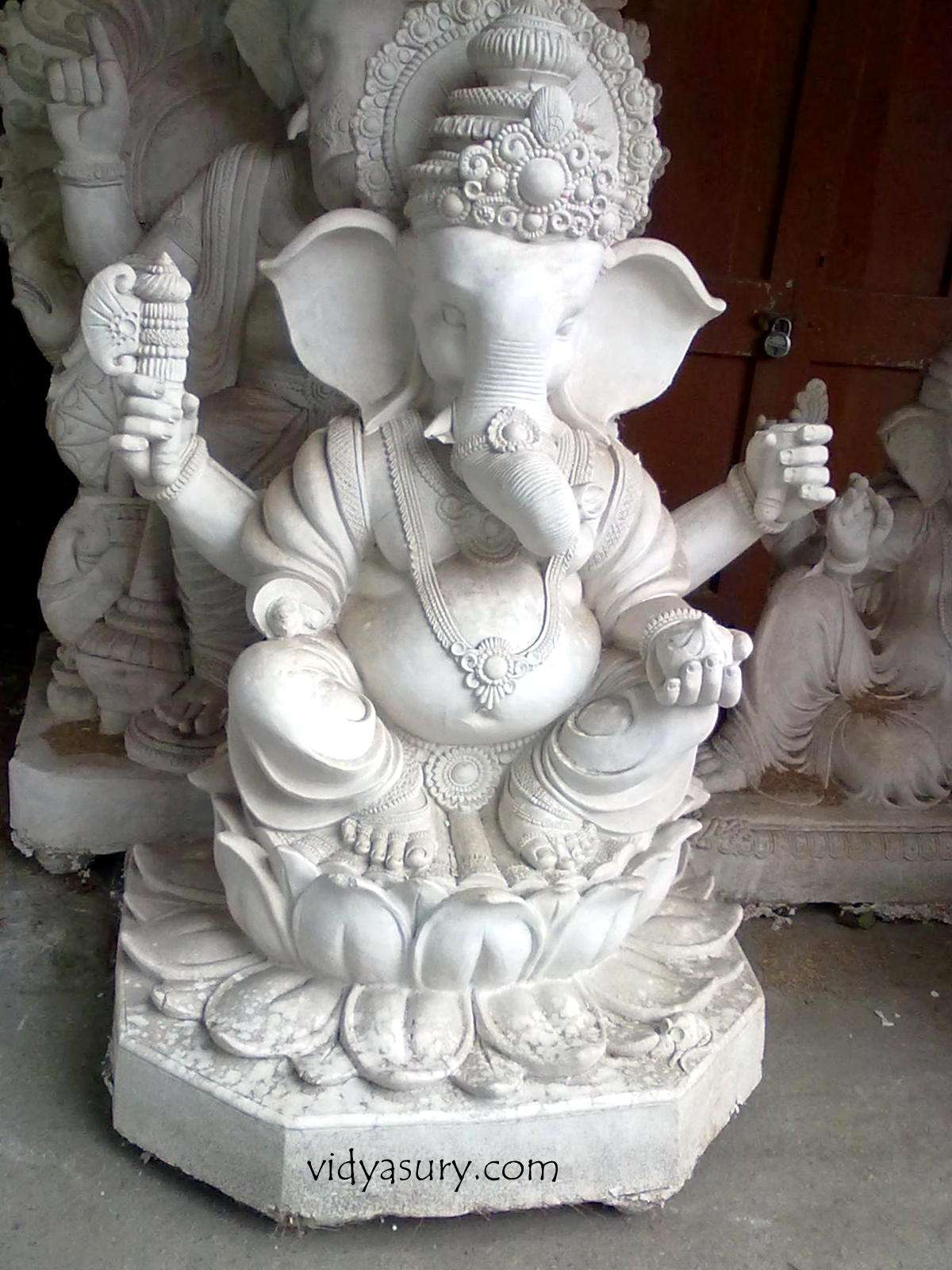 A Lesson In Patience 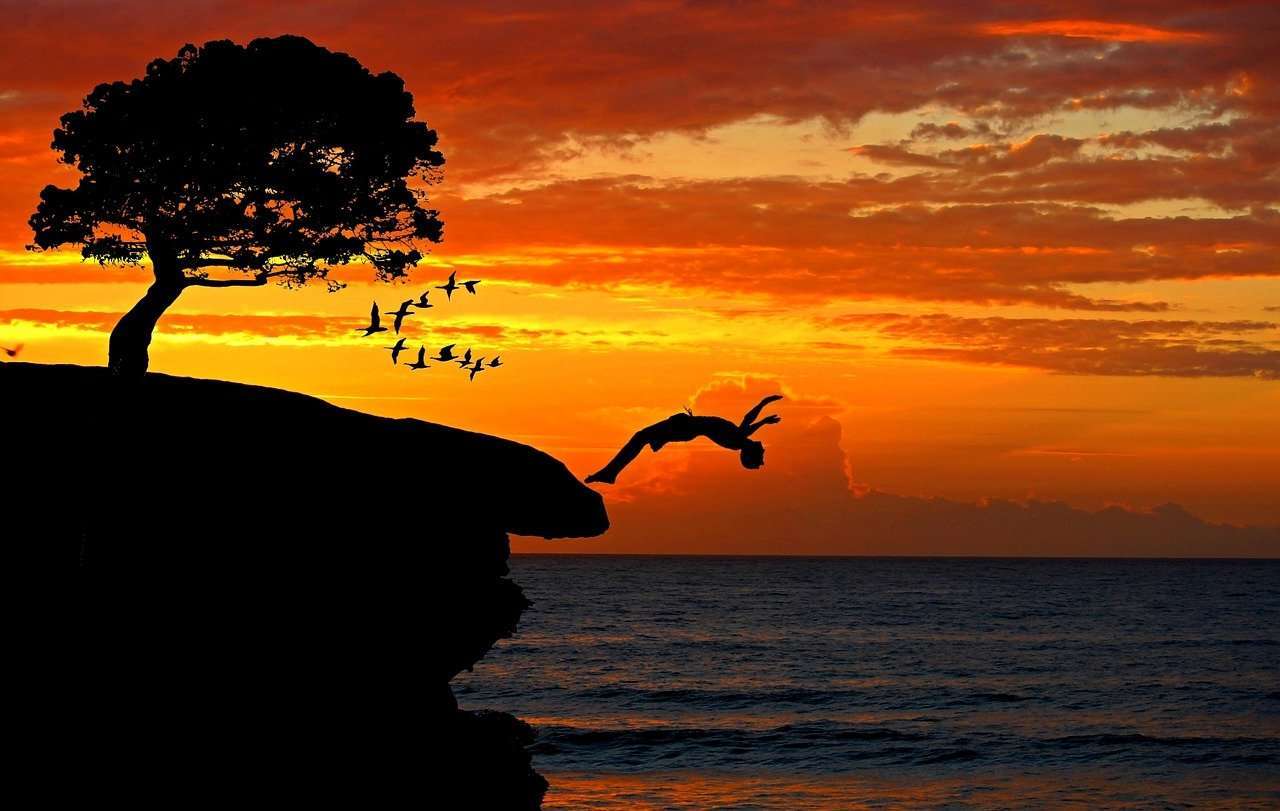 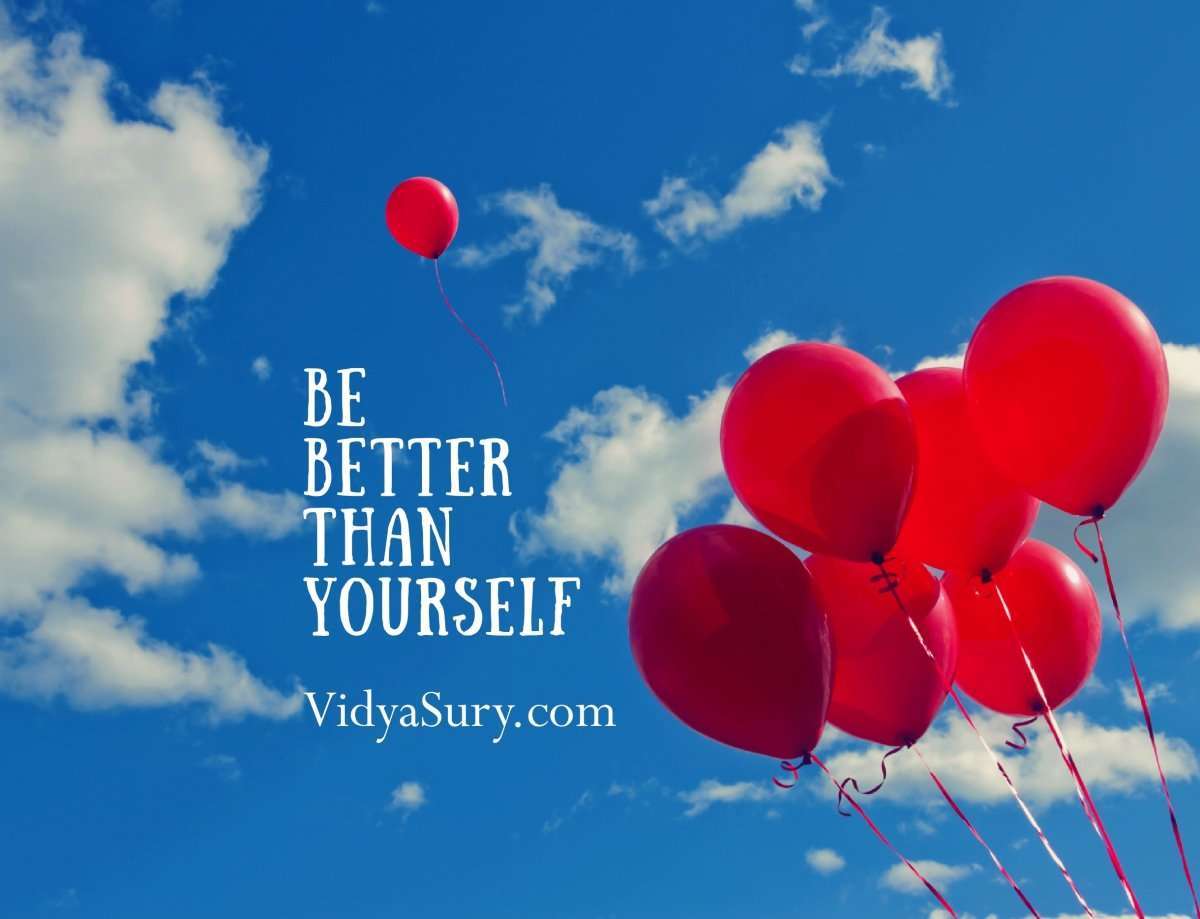 Hello Vidya, interesting topic, one very close to my heart. Forgiving and moving on does seem the right thing to do. But i do have certain reservations. Let us suppose a situation where one is in a hurtful relationship but there is no scope to ‘move on’ and neither is the other party ready to admit that they are in the wrong or ready to forgive in their turn. In such a situation would not ‘forgiveness’ on the victim’s part seem like a weakness and be taken as a license or sanction for further attack from the unrepentant party? Would not ‘forgiveness’ detract from the victim’s capability to take the reins of his or her life in their own hands? Would it not result in the grieved party making excuses for the others inexcusable actions? Is forgiveness the same as forbearance? These aspects of ‘forgiving’ in the absence of the other party’s compliance disturbs me – I would be very happy if you could throw some light on this. Thanks 🙂
Dahlia recently posted…Happy Holi–days

Dear Dahlia.. Thank you for your comment. On the surface, forgiveness seems like you’re letting the person who hurt you get away with it. The whole point of forgiving someone is a form of self-love. We do it more for ourselves, to help us move on, rather than tell the other person that we’re okay with what they did. In fact, forgiving is like sweet revenge, as my Grandma was fond of saying, because the person who hurts us might get some pleasure out of seeing us squirm and suffer, but when we react by forgiving, we’re practically telling them we don’t care. We’re basically letting go of our own hurt, so we can carry on with life. Of course it is definitely hard to let go of pain, particularly when the other person is unrepentant. Holding on to the anger and hurt affects our health negatively, and so, it is better to release that, for our own well-being. And? I’ve found that forgiving need not always mean we have to communicate it to the person. It takes a very strong person to fully forgive, let go and move ahead. As for continuing with that hurtful relationship, who wants to constantly be hurt and stay in that situation? 🙂

It’s not a question of ‘want to be constantly hurt and stay in that situation’ – some people dont have the luxury of an alternative, of actually moving out. To remain there, to constantly face abuse and to have one’s strength misinterpreted as a sign of weakness does make ‘forgiveness’ seem rather counter-intuitive. Yet I do agree that holding on to resentment and carrying on in that situation is nothing short of suicide. But then again what option do women with dependent children trapped in unhappy marriages have especially if their parents do not support them? I hope my questions are not a bother, it’s just that i am trying to find answers to questions that i am yet to understand. Thank you for your time and patience 🙂
Dahlia recently posted…Happy Holi–days

Dear Dahlia – I have taken the liberty to email you. Please see. 🙂 Sorry for the delayed response – I was traveling and just got back!
Vidya Sury recently posted…Filled With Gratitude

Oh such lovely words and you are right Vidya. Forgiveness helps us heal from within.
Parul recently posted…#Foodventures â Sweet and Spicy Mango Chutney

Hi Vidya!
I believe that forgiveness is not as difficult as people think it is. But some people make it sound big and tough and an impossible thing. They fail to understand that there is nothing they can do about what happened. It wasn’t in their control then, it isn’t in their control now. What is in their control is to let bygones be bygones and move on. Maybe the size of one’s heart makes the difference. A large hearted person seldom holds grudges, knowing fully well that we all are humans and bound to make mistakes which might hurt others at times. However, a person not born with such an attitude holds all that poison inside him and hurts himself as well as others in the process. Wish they knew better.
It’s really better to forgive and forget. The repurcussions grudges have are scary, to say the least. Don’t you think so?

It is so very difficult to forgive because we can hang on to the hurts so much…it can often define us. That being said you must let go of the emotional heartache it brings you otherwise you can never grow and make peace with your own self. It doesn’t mean you will forget and that the hurt may not come back every once in a while, like when you are not feeling well or someone else is experiencing what you have experienced, but you can move forward and help others. Can I say I forgive? I don’t know about that but I let go of the anger and the hurt. There is one person I can’t forgive even though I have moved forward. Thankfully, he is dead and I have been able remember almost all that was done. Let’s just say. I was 7 and he was a boyfriend of my moms best friend. By talking, it frees me since he was a very bad man who threatened me(like in the post I wrote) and, when he knew I might talk, threatened my family. Most of the memories came back when I was in my early 20’s but there is still one I don’t recall completely and that is my brain telling me I may not be ready and that’s ok. Can I forgive? Not this man but I have let go of the anger because it is too exhausting. I forgave the bullies I dealt with in grade and high school because they taught me what not to be plus enforced what path I should take which I am glad to have taken…belong people. Anyhow, this is why I love the quote from Buddha. Poison doesn’t taste that great
Birgit recently posted…Thursday Movie Picks-Music Biopic

Birgit, yes I remember what you said about those bullies, when you grew up. My heart just went out to you! It is true that some memories taste a little bitter, and yet, we have the tough job of losing the anger and making it a little more bearable. In fact, all through life we carry a lot of memories in varying shades of intensity – some require forgiveness, some continue to live in our heads – not exactly interfering with our routine days, but ready to pop up when triggered by something. Yes, indeed, that poison does not taste great at all! Hugs! Thank you for your insightful comment and sharing your feelings.
Vidya Sury recently posted…When I’m 60 this is how I want to enjoy my life