Top Posts
Learn to say No to yourself if you...
Joy shared is truly joy doubled (Try these...
What does your handwriting say about you?
5 Grounding techniques to take you from overwhelm...
Should you forgive someone who hurt you?
How to Encourage and Help A Loved One...
Don’t worry, be happy! Or how to be...
Tell No Lies by Allison Brennan Book Review
How to be more creative (with 7 powerful...
4 easy breathing techniques to help you effectively...
Home Personal development Should you forgive someone who hurt you?
Personal development

Should you forgive someone who hurt you? 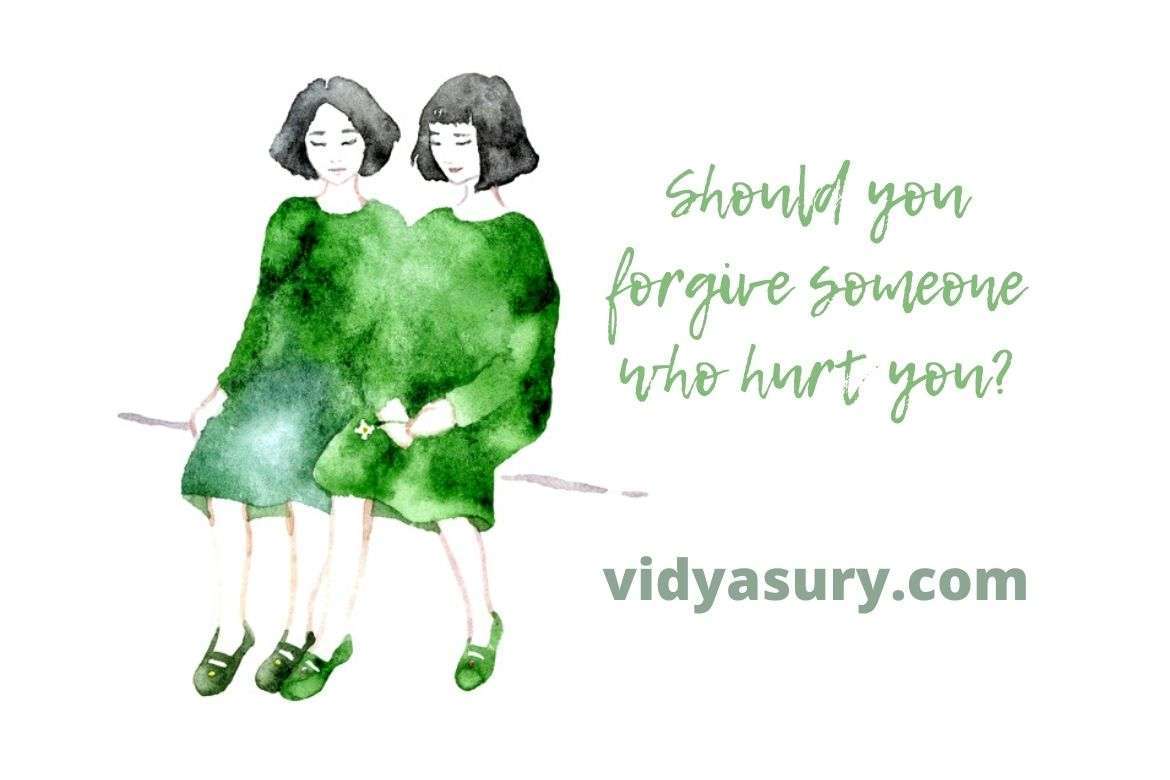 When someone asks you that question the first thing that comes to mind is why should you forgive someone who hurt you? The notion is ridiculous, right? Yes, you’ve probably heard it said a billion times that you should forgive and forget but what a cliché! Imagine forgiving someone who has destroyed your trust and damaged your sentiments!

When you are hurt and someone suggests forgiveness–you just don’t want to forgive because:

Why let the person you hurt you get away with what they did? Should they not be held accountable and make amends? Does forgiving mean my own pain does not matter? Is it okay for the offender to go away without understanding the impact of what they did?

It feels good not to forgive!

Hanging on to anger or grudges feels good. It lets you show someone who hurt you that they owe you for what they did. It is also soothing to be showered with sympathy. Oh you poor thing! It feels good to be the victim!

But wait a minute. Is it really worth holding on to that hurt feeling or grudge?

It is not. I would be the first to admit that it feels good to sometimes literally hate someone for what they did to hurt me but that feeling is quite temporary. Once the adrenalin rush of fury passes, all one is left with is a bunch of miserable emotions including sadness, anger, dejection and a big sense of loss.

You may not realize it just yet, but those feelings are there, just waiting to get in the way of your routine and mess with your mind far more than the actual hurt caused by the person who doesn’t deserve to be forgiven.

So, is forgiving and forgetting really possible?

I would say yes – if you have the strength to release the weight that holds you down.

Other things that make it possible for you to forgive someone who hurt you are:

When you realize there is more than one side to it.

When you think back after some time has passed, it is likely that you will forgive the offender.

When you see the bigger picture

You realize that it isn’t doing you and your health any good to hang on to the hurt. It is also better for those associated with you when you decide to forgive the one who hurt you. An appropriate example is a divorce where besides the two people involved, the pain affects extended family. If children are involved, forgiveness leads to peaceful co-parenting.

When you let your wisdom prevail over your emotions

Looking at things from an emotional angle does not always bode well. But when you see things wisely, objectively, you see the point in forgiving in spite of the way you feel, because you realize it is only a matter of time before you get over it and see the wisdom in moving on.

Also, as time passes, you feel readier to consider forgiveness.

So, coming back to why forgive someone who hurt you: I can think of at least three solid reasons. Think about it.

“To forgive is to set a prisoner free and discover that the prisoner was you.” ~ Lewis Smedes

Three major reasons to forgive someone who hurt you

If you didn’t forgive someone who hurt you, you would be holding on to unresolved emotions

My Mom was a single parent, not by choice. Just before I was born my father went abroad for higher studies and never returned. He basically abandoned my Mom, who had to struggle through life. Determined to support herself and me, she had to complete her education, because was married at 13, just after her 7th grade.

Yeah, I know! In the 60s that was a major challenge and she went through tough situations before she could get anywhere close to her cup of peace.

Every time I heard those stories, my blood would boil. Still does sometimes. But what is the point? Feeling angry wouldn’t feed us, clothe us.

And that is some really nasty emotional baggage to walk around with. As long as you have these emotions festering inside you, you can’t resolve them. Emotions like anger, sorrow, bitterness and growing grudges stem from that part of you that wants justice and revenge.

As if that weren’t enough, in the mess that is your mind you have all kinds of confused thoughts going around. These build up to such an extent that they keep you from ever feeling happy about anything because all you can recognize is the pain you are feeling.

When you release the need to blame and avenging yourself, you can actually step out of the situation and go on with your life. And it is absolutely worth it to do this. My Mom constantly told me that in life, it is useless to bear grudges.

Here’s one of my favorite quotes, adapted for the situation: Revenge is like drinking poison and hoping the other person will die. And that’s exactly what happens when you don’t forgive someone who hurts you.

Don’t forget. But do move on. Life is better that way.

Also read: How to let go of grudges to be at peace (14 helpful tips)

When you don’t forgive someone who hurt you, the anger in you makes you physically sick

Yes, of course you are entitled to feel outraged that someone would actually do this to you, but the longer you feel this way, the higher the chances of you actually falling sick. As if you need to add to your existing misery! Unresolved anger is known to cause high blood pressure, mental health issues, and even cancer.

I would say you owe it to yourself to be kind and caring towards yourself because you don’t want to make matters worse by punishing yourself with angry thoughts. When you forgive someone who hurt you, you are actually practicing self-care and safeguarding your own health.

Sometimes, when you forgive someone who hurt you, you actually end up becoming closer to them

As farfetched as that looks like, some issues can be the result of a simple misunderstanding and only need communication to resolve them. When you don’t address it, the chasm of misunderstanding grows, snowballing into resentment and pain.

What if you were to just sit across the table and talk it out? What if, when you did that, you just end up laughing because the misunderstanding has been cleared amidst “oh I didn’t know that”? It is possible.

Of course, there can be situations when it is not so easy to resolve things but if you decide to forgive someone who hurt you, you can still avoid it from messing around with your head. And yes, there is also the possibility that it can never be resolved. In that case, just let go of it. Why let it eat you up? Do what you do with garbage – throw it out. Clear up the space and get on with your precious life.

By forgiving someone who hurt you, you are the one who benefits in many ways – emotionally and physically. Being able to forgive also shows how strong you are because you walk out of that negative space into the positive area of acceptance, creating healthy boundaries. With time, patience and grace. 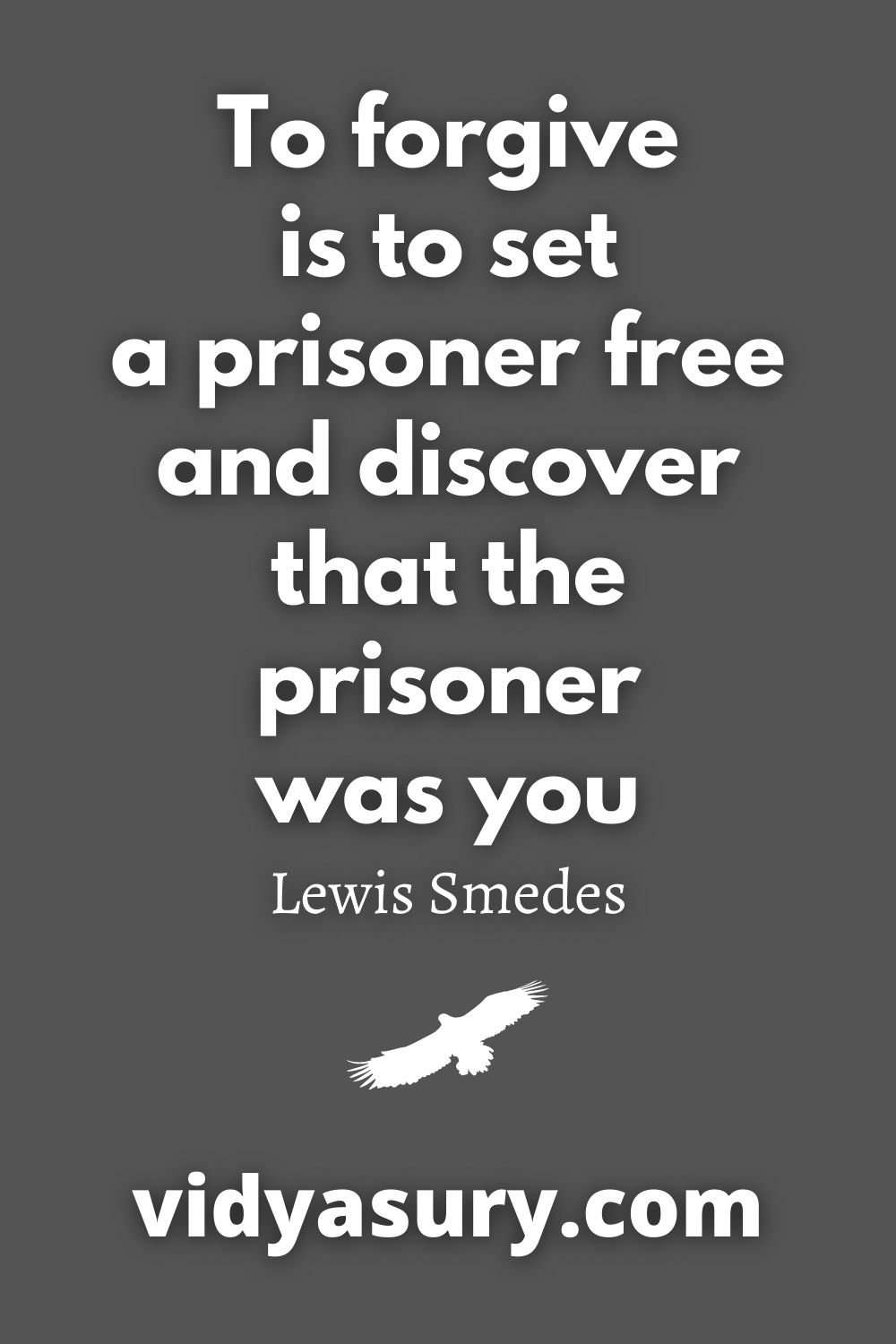 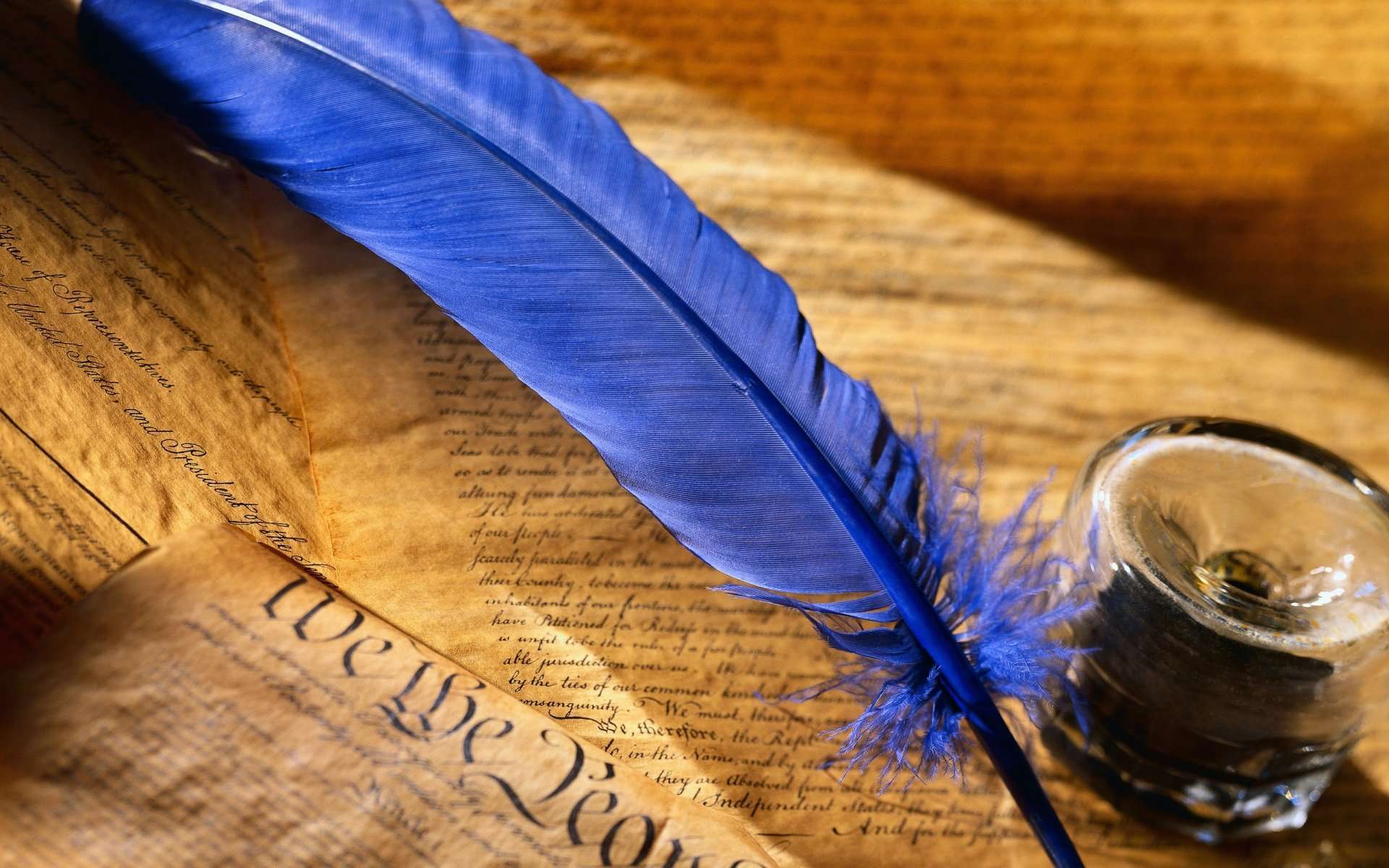 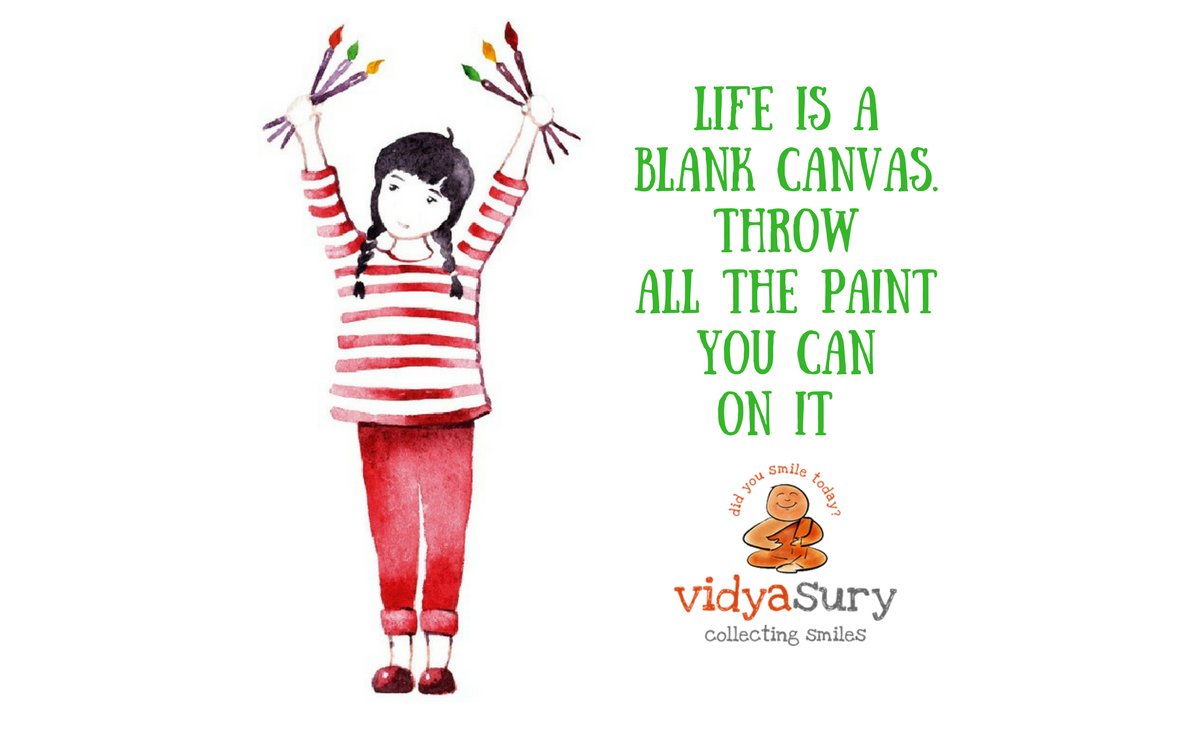 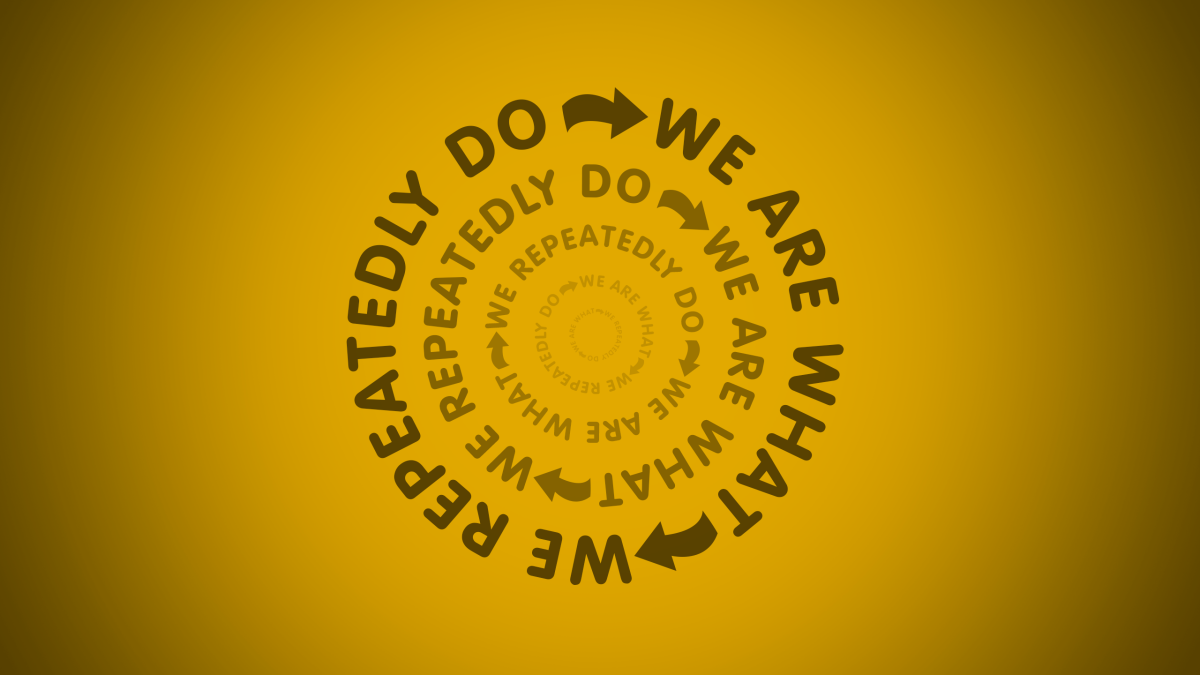 On Habits and Resolutions 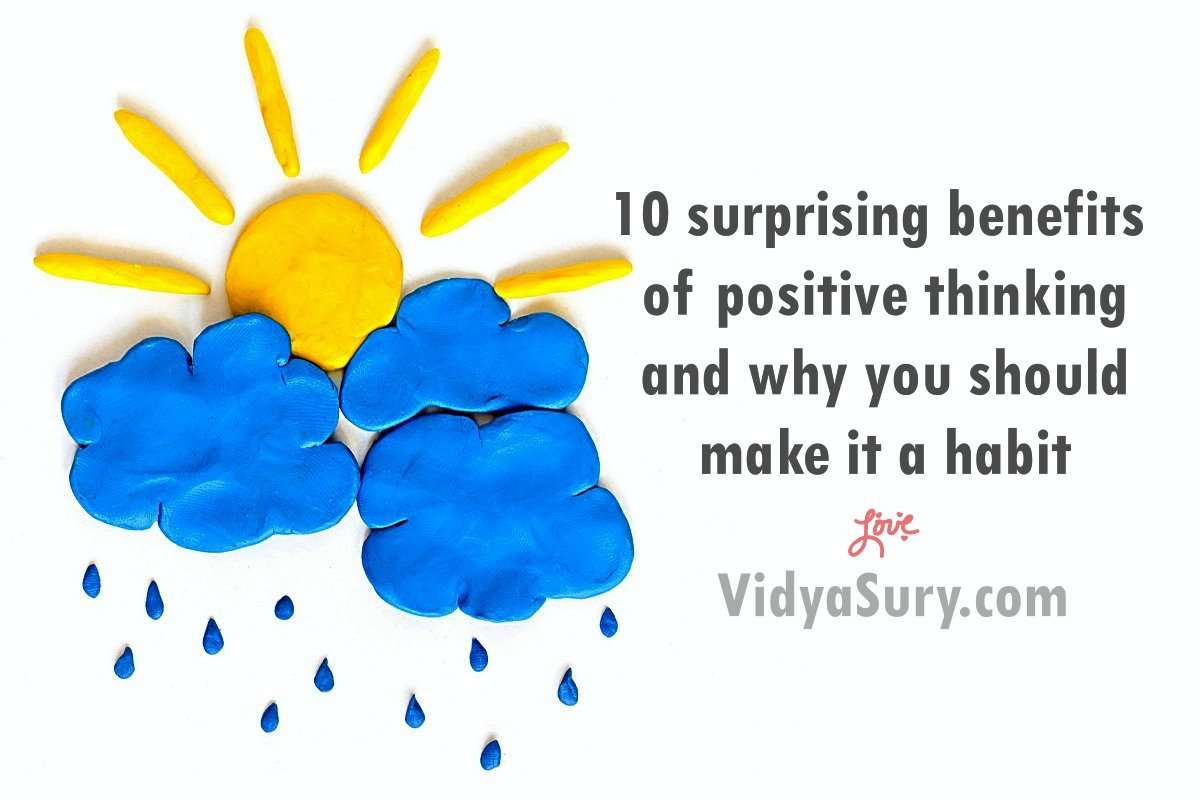 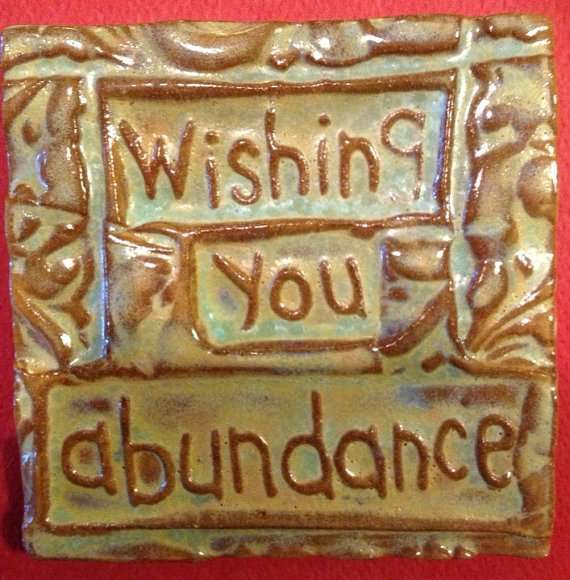 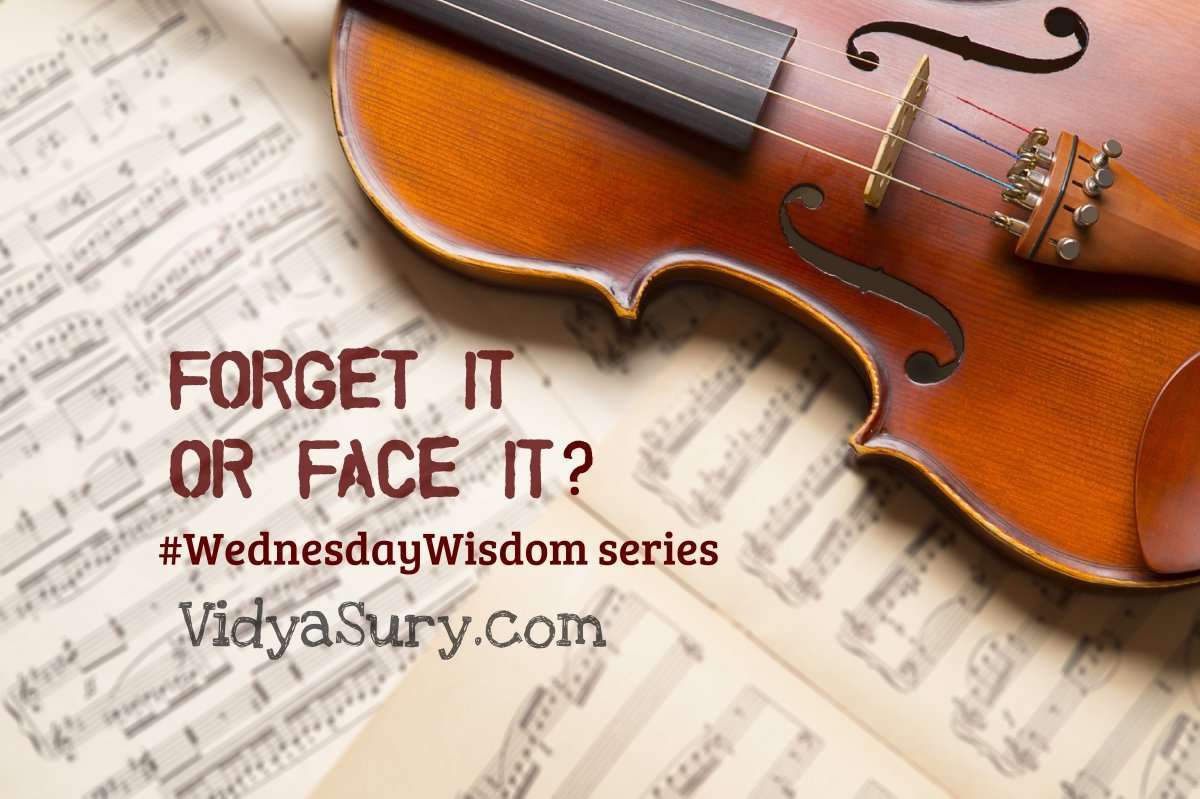 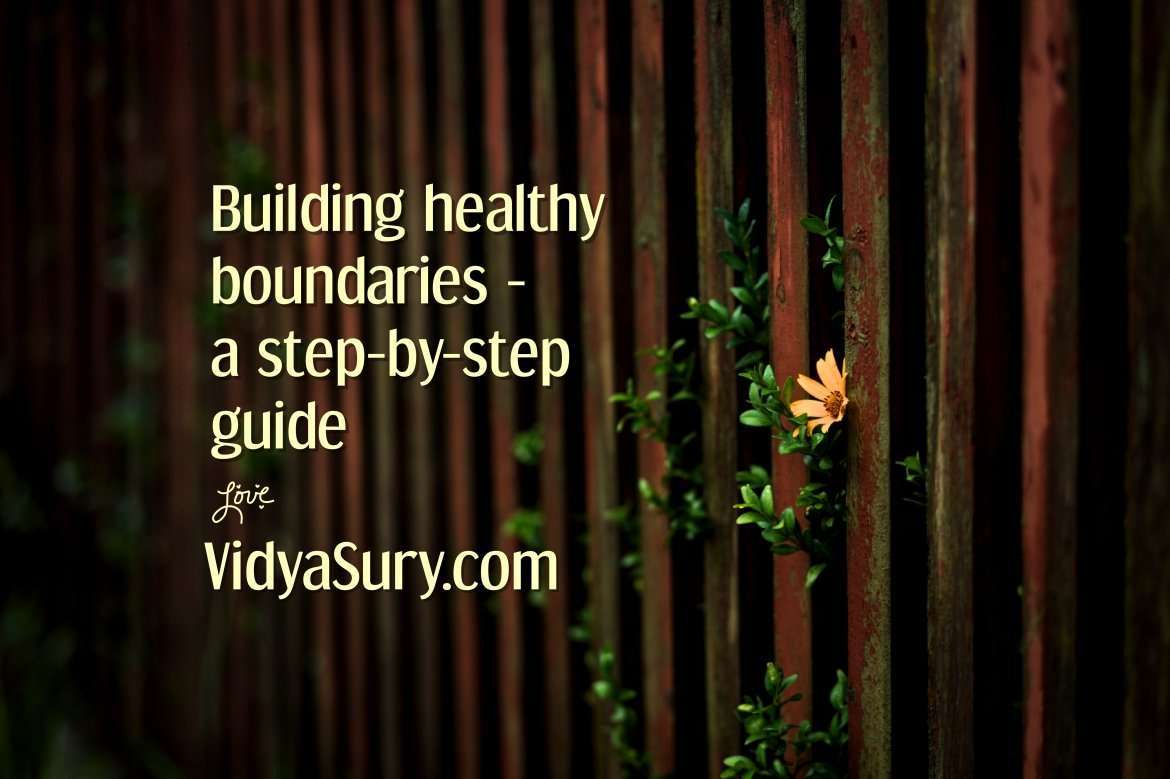 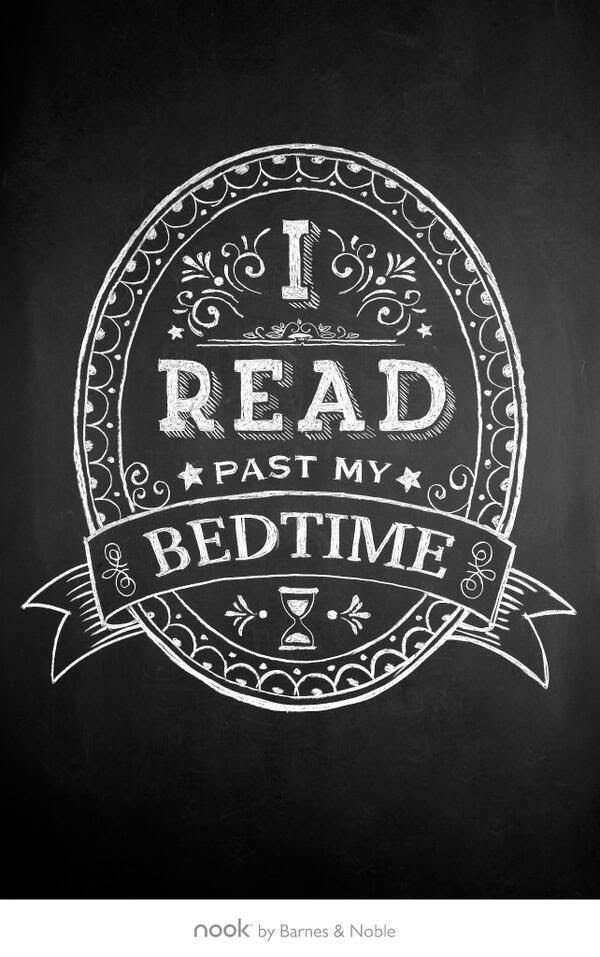 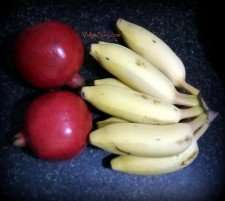 I am so glad I came across this post today. I really needed this today. Your posts are so calming and thoughtful Vidya. Thank you for sharing 🙂

What a practical and spiritual article Vidya. It’s so true that holding onto anger, hate, resentment etc really doesn’t hurt the person who caused the pain, we only keep hurting ourselves. The past only has an impact on our life when we keep revisiting it. No wonder it’s so hard to move into a brighter future! Thank you for this reminder.

There is so much wisdom in this post, Vidya! I agree with all the reasons you state for deciding to forgive. When it’s difficult to forgive, I’ve found that making an aspiration to forgive helps me at least gradually move in that direction. And sometimes we need to go back and heal early childhood wounds that make the hurt feel so gigantic and unforgivable. We also face hurt in our life and it’s so beneficial to have the perspective you’ve provided.
Sandra Pawula recently posted…How to Find Comfort and Ease: Part 1, Resources

Shutterstock is one of my favorite websites for images